The modern interpretation of “country” is nothing more than a misplaced label. It is a fashion fad that includes shiny trucks, fancy boots, domestic beer, and songs that manage to weave all three themes together with a catchy tune. The term “rural” probably applies better to the contemporary trend. Country is an ethereal way of life that is hard to define but when you see it, you know it.

I recently discovered a treasure trove of old pictures that I would like to submit as evidence towards a country certificate. This can be a game. First, look at the picture and try to spot everything interesting you can see. I will then assist by pointing out the things I see. We can compare notes in the comments.

I do want to offer a caveat or a p.s. to my mother and stepdad for what you are about to endure. I cherish everything about my childhood, it most definitely gave me perspectives and opinions that I would never have gotten. Plus I got lots of awesome pictures for my blog. Also, we are now square on the you-shooting-me-through-the-kitchen-window thing.

Okay disclaimers out of the way. Who is ready to play?

This one is easy. I’m riding a horse in a river. Notice anything about my horse?

No? Let me assist… 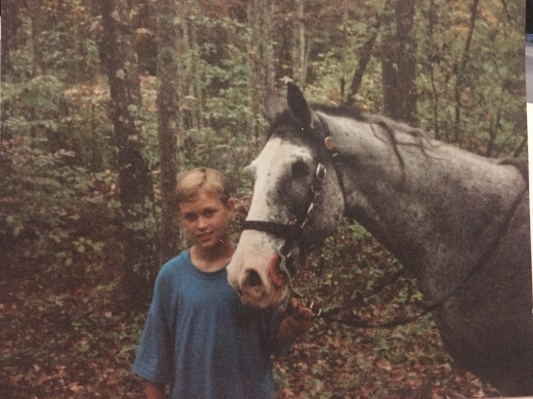 If your original answer was “Oh, I notice your horse looks like a victim from Jeepers Creepers or maybe the horse from Sleepy Hollow.” then you win. This was Lightning and he was the slowest stallion on the planet. A tumor left him with only one eye and he walked with his head slightly tilted to the left so he could see where he was walking. He was also really tall which is handy for lumbering around with a visual impairment. He was a good horse though. I hope he died of old age and not from wandering into traffic.

Bonus: I think I’m wearing one of my parent’s T-shirts.

You might be a redneck if entertainment was rolling down the hill in front of the house and letting the dogs chase you. It was good during snow but a little bumpy on grass. Also, I am wearing rubber boots which is the official childhood boot on a farm. Cowboy boots are for riding. 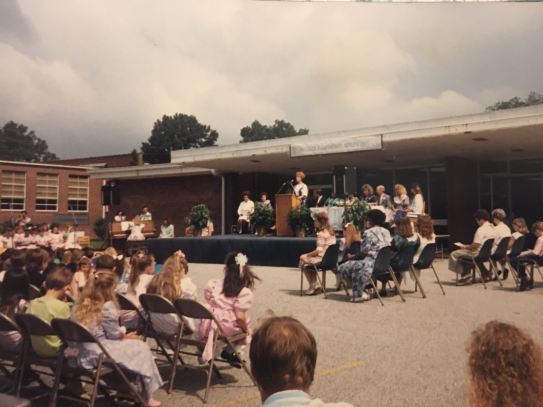 This is awards day at my elementary school being held in the parking lot. The only parking lot. Where did everyone park? We had a gymnasium. Why? 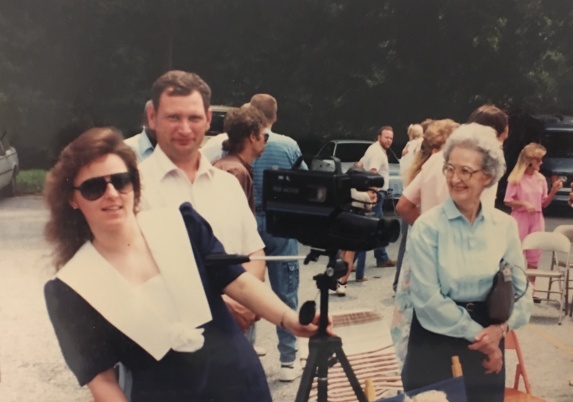 Is that Michelle Duggar? What is she wearing? They still own this camera. 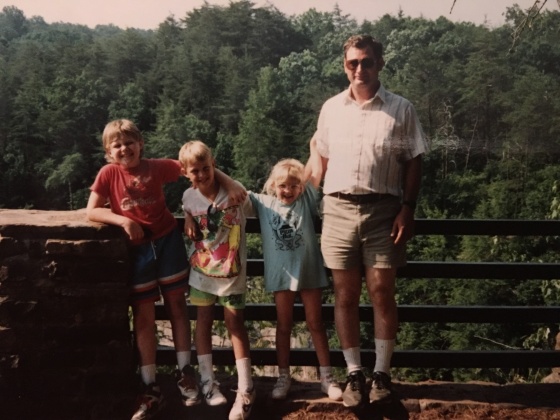 Family vacation to Fall Creek Falls. What the hell were we wearing? Did we share a new pack of tube socks? This photo counts towards country because I showed it to my mother yesterday and she said, and I quote, “This looks so suburban.” On what planet under the almightly Lord’s sweet creation is this style any measure of “suburban”? Good lord.

A) I don’t think my sister has pants. Mom swears she does but I’m unconvinced. I do remember her Pizza Hut shirt was from a Land Before Time themed birthday party.

B) My stepdad looks like he escaped from the law and robbed the first elderly man checking the mail that he happened upon.

C) My cousin has rainbow short shorts. God bless the eighties. This might have been early nineties but those clothes are a hold-over. And we shared a haircut style too.

Who thought, Hell yeah, this is a moment. Y’all squeeze in close for a picture. They were right. This is awesome.

I may frame this one. 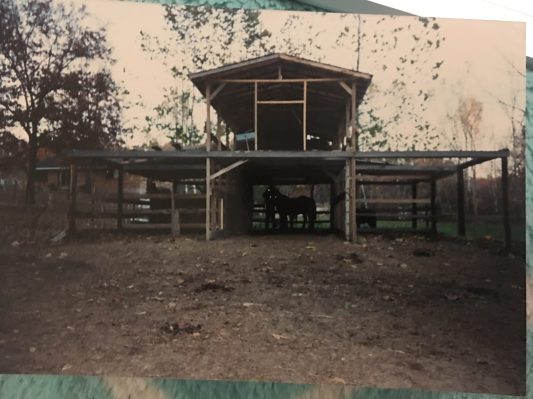 We built this barn like the Amish. Except the Amish get lots of people and do it in one day.  I remember building the skeleton of the barn and then adding to it every season by recycling some nearby building. Maybe a neighbor had a chicken coupe that they no longer wanted. Piece by piece we sculpted a masterpiece. There were these eight inch nails that were forged by the devil himself and intended to drive you insane because they would bend in a slight breeze. If you didn’t hit the nail perfectly it would bend in half. The nails were ribbed so they were impossible to pull out once they got started. I hated those nails.

Thirty years later and I think this barn is almost done. In multiple ways. I love sitting in the barn while it rains on the tin roof. It is very soothing.

This is a picture of my mom with a newborn foal but the item of interest to me is the livestock trailer in the background. The infamous “red trailer”. The yellow top is a recycled chunk of school bus and the sides and front were welded onto a regular flat bed trailer. Everything was then spray painted red. A few years of UV damage and some miscellaneous rusting created an awe inspiring symbol of country perseverance.

The foal was a girl and named Grace. She is an ornery old lady now. Also, that stall in the barn now has a solid back wall. When did that happen? Who knows. Barn gnomes. 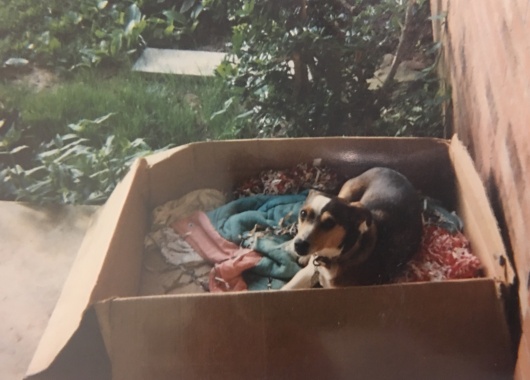 We put a lot of effort into super fancy dog beds. This is Alicia, patron saint of our farm. She lived to 123 in dog years and in her final months of life she appeared to be a solar powered skeleton. She once fell off of a spiral staircase onto a concrete floor. Smacked like a bowling ball. Any mortal dog would have died from a brain bleed but not her. Nine feet down and she walked it off like a zombie that got shot anywhere besides directly-in-the-head. She was a really good squirrel dog and loved hunting down rats that lived under the dog houses.

All this stuff counts right?

This photo has lots of options; the wooden cows, the gun by the backdoor, the outdoor plant hanging inside, the playhouse in the backyard that was crammed full of junk or chickens (I can’t remember which), the curtains, and the pet bird (Spike) that was later eaten by a cat.

This is the cat, Patches. She avoided a brutal broomstick beating and lived to be an old lady. Its a miracle mom didn’t take her out with a shotgun after Spike got eaten.

This one is self sustaining. House trailer, trucks, dogs, a spare tire, gravel road. A song in a picture.

We had some farm animals that were dangerous and we kept a stick with us for self defense. We had a turkey and a goat that were both mean and immune to physical assault. I watched my mom loose her shit on the turkey when it tried to spur her. She grabbed a stick and whooped that dude like a dirty rug. He lived but not much longer after that incident.  I couldn’t find any pictures for those.

If you enjoy pictures that capture an era frozen in time, this post is for you. You’re welcome. To my Dad and Stepmom, don’t think you got off easy. I just haven’t gone through photos on your side in a while. Soon. soon….