Day five hundred of my captivity…

I have taken a total leave of absence from writing for what is probably a year. And people still stop by the site and see if something new is rolling off the press. Thank you guys. It feels good.

I’ve been busy and my will to write anything at all has been missing in action. I got to the point where I don’t feel like I have anything to share and now that the girls are getting older some of my previous story styles are no longer mine to tell. Tales of toddlers taking mystery shits on the furniture is fun and games but teenagers with technology will probably not be as understanding. I even thought about pulling site down and archiving for some future generation.

But not to worry, COVID-19 has entered our lives and I don’t have much sanity left. I need the therapy that only blog-style bitching can provide. A unity through misery.

So here is a feeble attempt to document our craziness.

The strangest thing so far is dealing with the ominous slow crawling feeling of disaster and vacation all rolled into one. We started our distancing on the kid’s spring break so when school got cancelled (they call it postponed but we know better) it just felt like the world’s longest weekend. If you watch the news then the world is ending and if I look outside the magnolia tree is blooming. My black car is yellow from pollen and people are walking their dogs more than I remember. Select shelves are empty in the stores but the shoppers meander around smile at each other, making small talk about COVID-19 and the lack of toilet paper. Milk, water, and bread have recovered from the initial rush but paper products may never recover.

Work life is much the same. For the first week it felt like we were trying something new. The second week we all unplugged our hardware from the office and logged in from our living rooms to get emails and take conference calls where kids played in the background. We try to move things forward but this second week was marked by the depression of knowing that we are just getting started in our new normal and lots of wondering if there is a point to trying to work or teach the kids about fractions. The third week may be the charm. The week that we get the groove and settle in to fight this thing off. I hope it is.

I tell my kids to take note. To keep a journal.

I remember an ice storm in the early nineties. We lived in the country and power networks were decimated. I think it was around two weeks before power was reconnected for our area. We cooked on a wood burning stove in the basement. We stayed warm and managed to get a generator to hook up a few essential items like our well. It was a time I remember as fun and interesting. We were toughing it out and surviving and there is something fulfilling about that even when it isn’t easy. I hope my kids remember this time in the same light. For me it is different because we have all the luxury we could want for a quarantine. We have Netflix and Disney and Prime. We have tablets and phones and a schedule that hasn’t been this free since college. It doesn’t require any work or effort. It doesn’t feel like surviving and I assume that is why it also doesn’t feel fulfilling as much as it feels depressing.

Prima, our second daughter, came into our room a few days ago with the complaint of a fever and a headache. We checked and it was 102.5. Fantaaaaastic. Two weeks of distancing and it arrives anyway. The next morning the fever is gone but a slight cough has joined the party. By the end of the day the fever is back. We treat with Tylenol and go to bed feeling like the wave is about to start crashing around us. Then she woke up this morning with no fever, no cough, and a pep in her step. Like it never happened. She probably had one of a hundred colds and some spring allergies but when every sniffle feels like Ebola has taken root it is exhausting.

I think we are developing some sort of quarantine PTSD or cabin fever. That can lead to impulsive and irrational behavior. Which reminds me, we got a baby wallaby. Her name is Stevie.

We also dressed up in fancy clothes and Mardi Gras masks to have our picture taken by a neighborhood photographer. She arranged to walk around and take photos of people on their porch. Three weeks ago that would have been a strange proposal but today we thought “Oh cool! Let’s dress weird and stand in the yard.”. 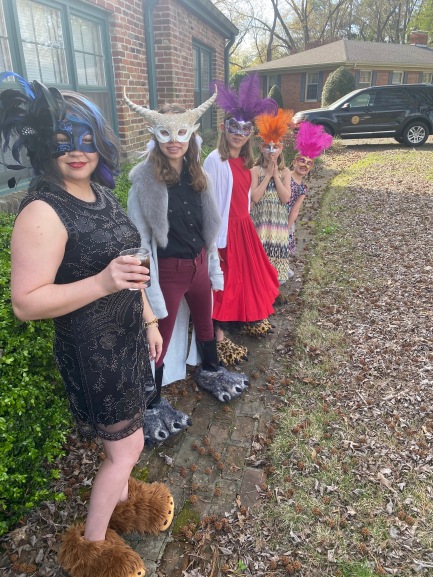 Everyone is shoving stuffed animals in the windows to give people a fun game of I Spy.

I think recorded history will have a new milestone. I propose B.C. (before corona) and A.D. (after distancing).

There have been upsides. We have been forced to slow down and exist around each other more than usual. We don’t have the pressures of early mornings and things to do at night. I sat with Jane and shared music for five hours yesterday. We went through notable hits from the eighties and the highlights of the millennial playlist. The we watched The Matrix. It was interrupted by a tornado warning and everyone huddling in the laundry room. We weren’t sure if we would rather die by tornado or suffocation from Judy Cornbread farting.

There were terrible tornadoes in Tennessee a few weeks earlier and last night a bad one hit Jonesboro, Arkansas.

Houses are sliding into the Tennessee River from flooding and an overly wet spring. Whoever is playing Jumanji needs to buckle up and finish the damn game because all this chaos is wearing thin. And we’ve all but forgotten that this is an election year. Once this virus clears they will be spending all that political ad money in a compressed window of time before the election.

Silver linings. Something to look forward to.

Anyway… good to talk to you and hopefully I will make a successful return to the keyboard.

If you are sheltering in place and trying to treat the virus from the inside out, with whiskey, this post is for you.