A few weeks ago I had the opportunity to visit my Alma Mater for a series of nerdy engineering meetings. Things had changed on campus and I barely recognized the place. My memories were ghosts that were wound around things like the new apartment complex where a place called Cool Beans used to exist. Memories of Wednesday nights sneaking beers at Campus Pub; now a Holiday Inn Express. 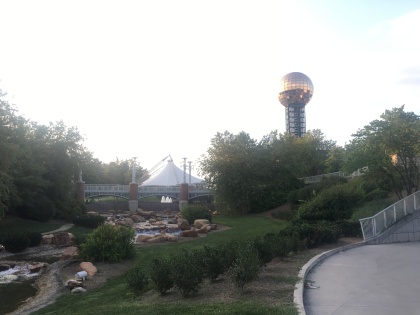 The big monuments were there. The Sun Sphere from the World’s Fair. The Henley Street bridge.

I walked past my old dorms and around the stadium near the engineering building that had just been demolished. It is hard to think about the places that define you and how they are transient themselves. That school I attended was a snapshot in time and exists now in a different way.

I had some free time one of the afternoons so I took a drive up to the Smoky Mountains. Gatlinburg to be exact. In 2016, the mountains caught on fire and raged unexpectedly into the town. Hundreds of buildings were destroyed. Several people lost their lives.

The aftermath was a burned hell-scape where concrete and steel were destroyed along with the forest and all was left in a scattering of grey ashes. We only saw the damage on the news. For two years we hadn’t made the trip to see the mountain.

It looked as pristine and beautiful as I remembered. Had it been my first visit to the park I might not have thought to look around for signs of the fire from two years before. 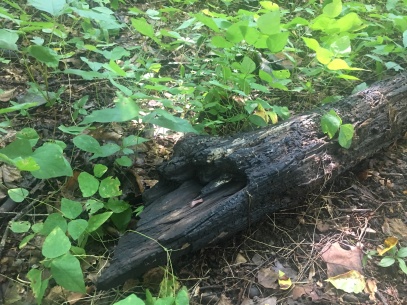 Charred logs were underneath the brown and green. Moss was reforming and the charcoal was well on its way to being reclaimed by nature. The scars were there but life has started the endless rebound.

Higher up on the mountain, the vista told a clearer story.

The old tree trunks of the dead forest poked out like quills from a giant porcupine. The green blanket covering the ground was starting the job of rebuilding a forest. All of the plants on that hillside came from another plant as a seed. The fire was terrible and destructive but it allowed them room to grow and become every bit as great as the forest they are working to replace. 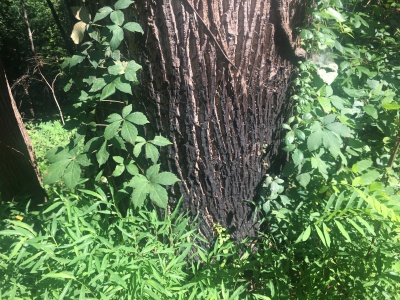 I drove back down the mountain and continued on with life.

The next weekend we had an unexpected loss of a beloved farm pet. Jane’s favorite goat Mallory fell ill and within twelve hours was dead. This goat was the smallest of triplets and since a momma goat only has two teats, she had to be bottle fed. Mallory imprinted to Jane and seemed to count the minutes between her visits. She was a loving goat and a friend to a child who has definitely needed one in the last few months.

We gathered at the farm and dug a hole in a shady spot on the hill. Everyone stood in a circle around Mallory and watched through our tears as Jane shoveled dirt onto her friend. 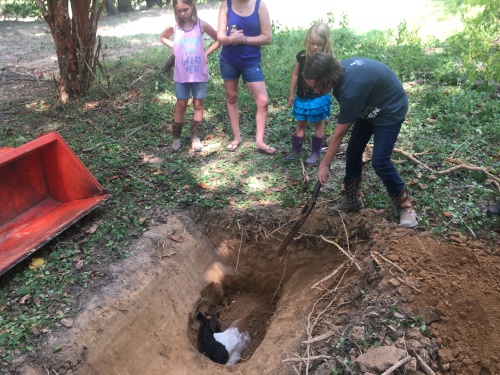 There is therapy in the funeral traditions and the effort of ceremony. Doing something to say goodbye and honor a friend is good for the soul. I’m proud of the strength I saw in Jane that day.

I dare say that I know where she got it.

This morning, Supermom’s grandmother passed away after a long battle with cancer. The common phrase, “Battle with Cancer”, is often just lip service to a slow spiral. This woman battled.

We visited her several times in the last few months and each time we had a tearful goodbye because we thought, “Well… this is it.” She flat-out ignored death to take care of her ailing husband who passed away a few weeks ago. She wanted to make it long enough to attend his service and see his burial.

We sat and talked with her after Pop’s funeral and it was clear to me that her mind was better than my own. I was in awe of her selflessness. Here was a woman who had always carried a healthy weight and had been reduced to maybe eighty pounds. Maybe less. Cancer was in her joints, bones, and multiple organs. It was pressing on her nerves and causing vision issues. She was continuously attached to an oxygen tank and overwhelmed with a routine of pain meds and nutritional shakes. Earlier in the day she had seen her husband of more than forty year lying in a casket. She knew he was being buried the next day.

She will totally haunt me for posting this but I like the peacefulness of it.

Despite all this, she was concerned if her grandchildren needed a drink or something to eat. I never heard her complain. She used her time to ask for details about our lives and how the great-grandchildren were doing. She delighted in giving away precious pictures and memories to family who wanted them. If there is any advantage to a prolonged illness it would have to be the gift of saying goodbye.

There was a picture hanging on her wall of her at an early age; twelve I think. The link to my wife and my second child hit me hard and it brought tears to my eyes. I could see a visual tie to a woman who shaped some of the things I love most in life. The beauty that I see around me every day. The caring that takes care of me when I don’t deserve it. The constant crafting and creativity that consumes every nook and cranny of our house. The gentle personality and sense of humor. The strength to say goodbye to the ones you love and lay them to rest.

She always had a goal and a focus. Her last goal was to die on a Sunday and despite all logic she made it happen.

Its easy in life to stand around and feel despair as your beautiful mountains are burning to the ground. Its hard to see how the world will recover when such wonderful things are lost. But we carry on. We put down better roots, turn our leaves to the sun, and hope to one day be the mighty trees.

If you are working to survive the fires of life, this post is for you. You’re welcome. Anytime you lose someone named Granny it is a true loss. Granny isn’t a term that is handed out lightly. She had my vote from the very first time I met her. She hid a bowl of homemade ice cream for me in the freezer because I couldn’t make it to the campground as early as everyone else. That is pretty special.