The last few days have given us the gift of togetherness. We have no option because we are snowed in. On Friday a winter storm dumped an inch of sleet and four inches of snow. All of that came on the heels of an inch of rain which made preparations, like salting, impossible. Typically, a southern snow will be gone in a couple of days because we live on the boundary of the battle between the Arctic Vortex and the Gulf of Mexico. I’ve seen many days where a six inch snow in the morning is melted by a seventy degree heat wave that afternoon. Not this time.

The oldest two children went to Mamaw’s house on Thursday night. They planned on helping with the farm animals and getting an early start on the snow day. The sunshine after the snow has done very little to melt things thus far. We are going on day three and our road is a solid sheet of ice.

My Facebook feed is full of bad driver and icy pileup compilations. This was one of my favorites.

We made snow angels.

Not everyone is jazzed about the process. 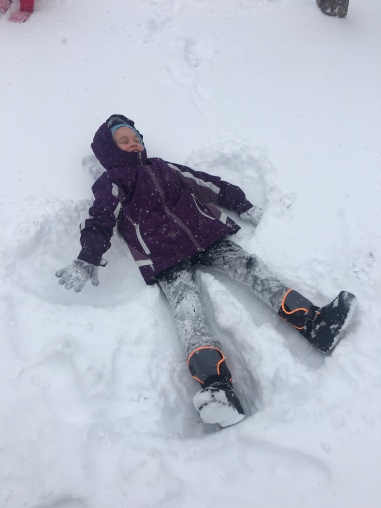 While they enjoyed the snow I filled up two buckets with snow for snow-cream. In a tremendous show of my will power and self-restraint, I only had three bowls. 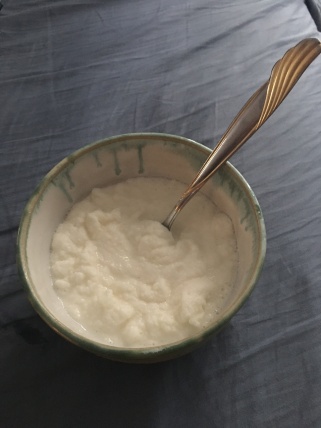 At least the bowl is organic.

Netflix and Screen time. All. Day. Long. Lots of food and two more bowls of snow-cream. I learned to use SketchUp.

Its a water control structure. I’m a water nerd.

A lot like day two. We did make it outside though. We journeyed through a field across from our house to see how messy the road was between our house and the highway. Spoiler: The road was an icy mess. Our walk was a good one. We stopped by a pond to toss ice chunks onto the surface and listen to the cool sounds that echo through the surface.

On our walk back I took a picture of a moment that caught me just right. 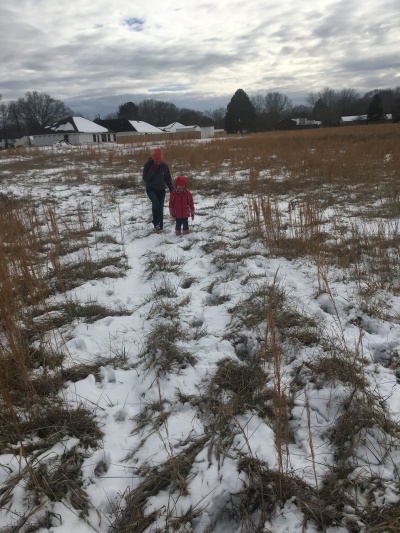 She is plotting her course.

The snow and ice had built up on top of the grassy field and wasn’t actually on the ground. Lady Bug was struggling with the walk because each step would break through the ice and throw her off balance. She started to walk in the same places where I had stepped because it made her work easier. I blazed ahead of the group trying to plot our course through the field. Supermom urged me, “to slow down and ease my stride because she was trying to follow in my footsteps.” It was one of those moments when a shallow comment speaks a deeper truth.

Slow down and ease your pace because she is following in your footsteps.

Leave it to a snow day and cabin fever to teach a lesson like that. We made it back to the house and surprise, surprise… ate more snow-cream. Baths. More Netflix. We will see what tomorrow brings.

If you sometimes need Mother Nature to pump the brakes for you, this post is for you. You’re welcome. I’m looking ahead to more snow and a low of eight degrees. My HVAC unit is making a weird noise so I can bet which day it will self-destruct.