The loneliest place in the world… when you start to make a fresh batch of five can soup and the can opener breaks. Mother of all things righteous, why have you left me defenseless against fate? Have you ever stabbed open a large can of diced tomatoes with a Calphalon steak knife?

I can tell you that there are prettier situations. While stabbing is good for dealing with unresolved aggression it is not handy for keeping metal shards out of your soup. Or blood. Probably a conspiracy by the “Big Bandage” industry. 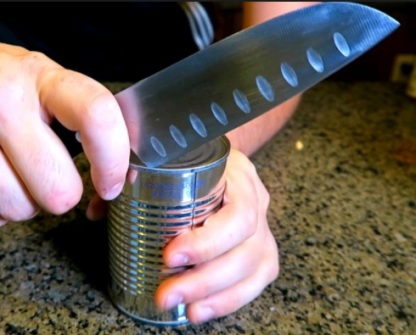 What has our world come to? In this age of improving things with science and technology and materials engineering, how do we still have such shitty hand tools? A can opener should last longer than five months. I bought the most expensive one at Wal-Mart. I counted the additional cost as a wise investment, something that would pay back over time. Instead I bought a goodtime Charlie that abandoned me at the first sign of a struggle.

My great grandmother had a can opener that I am pretty sure was made during the great depression. Forged from carbon steel and tears of sadness. That can opener was made to beat the Nazi’s and spread freedom. It could peel through a Panzer tank. It might actually be how the Russians got into Hitler’s bunker.

They made things that would last because their lives depended on it. Imagine trying to survive the apocalypse on canned goods with a can opener that won’t grip the side of the can. Spoiler alert… you would die from exhaustion while trying to smash open your cans with a rock. Granny’s can opener might have required three hands to operate but it would cut through steel ball bearings if it had to. Not like this lifeless wad of steel that can barely push its way into some whole kernel corn. I’m disappointed in humanity.

If you have ever had a cheap utensil break mid-use, this post is for you. There is a thin line between civilization living with the brutality of a cave-man life. That line is long term food preservation. All you need to cross it is a damned can opener. You’re welcome.