I’m a little nervous. Tonight I am sitting here counting a pile of cash that I found on my doorstep. Not really a pile as much as a roll of cash secured with a rubber band. Just lying there at the front door. Do I call the cops? Who leaves money at the front door? I would ask Donna Threeto if she has any ideas but plausible deniability can be a valuable thing.

When we got home she saw the roll of money and cocked an eyebrow. “Whats that?” I put it in my pocket and she squints at me. “I don’t know honey. Looks like someone lost some money.” Undaunted she asked, “Can I see it?”

“Stop asking about the money.”

She cut her eyes at me and disappeared to her room.

I carried the fat wad of green into my bedroom and proceeded to count the value. All told we had found $916,519.

Too bad the money was printed in China and doesn’t include being actual legal tender. This still could be a shakedown on a neighborhood kid by my future CEO. I’m going to play it cool a few days and see if any new info leaks out. I’ll keep you posted.

Another thing that happened this weekend. We went to see Beauty and the Beast. That’s right. I put my morals and heterosexuality at stake and sat through what was sure to be an onslaught of man-on-man indoctrination that would squeeze my powers for rational thought. 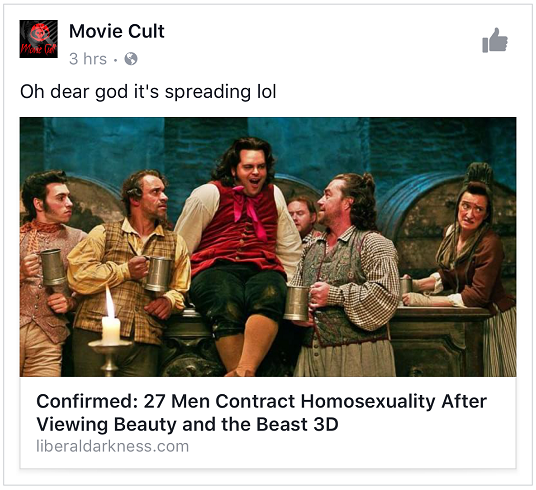 The movie was good. Emma Watson was perfect. The CGI team did a great job with the Beast. Gaston was played well and I had a little heartburn over how they executed the ending. It removed some of the symbolism of Gaston’s bravado sealing his own fate and left things to fate at large. There were a couple of additional scenes that strengthened the story and a weird witch came back to make the ending less logical. A better premier than both Fifty Shades movies because although there were lots of children in this one I am fairly certain that zero children were conceived in the 90 minutes that we were there.

Phillip got a squirrel chalet on the back porch. He hates the outdoors. He stays inside the cage and runs back and forth. So much in fact, that the residual aluminum dust generated from his sliding around has colored his dragging nuts a dark shade of grey on the lower half. Im going to have him Knighted as a servant to the Queen; Sir Phillip Blacknut the First.

The baby sugar glider is out and making friends. Harry Glider is his name. We didn’t have a solid plan for a girl because his parents were already named James and Lily. We back ourselves into a corner there but it worked out.

-If you have a questioned your manhood from a Disney movie, own a squirrel with half-metal nuts, or found a large sum of random money lately. This post is for you. You’re welcome.