I am watching a nature show. Disney Jr is doing a short segment on how a troop of monkeys (troupe?) looks after the baby monkeys. I feel like I am looking in a mirror instead of a television. One child is climbing the side of the couch and jumping off into a pile of laundry. One child is pilfering through my hair. Lady Bug is sitting on my lap and alternating between poking my nipples and my bellybutton. I have no idea where her fascination with poking nipples comes from but she giggles every time. I silently remind myself why I always wear a shirt, because you can’t trust a kid around a nipple.

There was this other time when it was really late at night and Supermom was tired from rocking a crying baby. I rolled out of bed and took the baby and lay her gently against my chest. The next thing I know there was a rushing of air like the sound a vacuum makes when you stick the hose to someone’s face. Awkward. I plucked the lactic leech off the male mammary and began the wise habit of always wearing a T-shirt. You never can be too safe.

Speaking of false sense of security, our youngest had a random blowout diaper. The kind that bubbles up the front and onto the floor, her hands, and my bed sheet as she rushed to tell mommy she had pooped. Once again we were up until midnight waiting for dry blankets. I am ready for this potty training thing to begin. We are down to one excretory system that requires diapers in this house, which is nice. I can see the light at the end of the tunnel.

I have friends with children who are making strides towards potty training. One such child reached the milestone of recognizing the urge to poop and removing her own pants to poop… directly in the center of the carpet. She was so proud. That is definitely a time to be a glass-half-full kind of guy. My kid calls me over before she shits and basically keeps me on standby to repair the damage she is about to do in her diaper. She doesn’t want to try the potty. She just wants a peasant nearby to wipe her royal ass to prevent chaffing.

This kid knows how to go and GI Joe says knowing is half the battle. It kind of looks like a prancing Irish Setter at a dog show.

Other big news this week…

Don Threeto practiced cutting hair and Supermom had to carry Lady Bug to get some minor shaping. She was combing the knots out of Lady Bug’s hair before leaving and she stopped to send me this text… 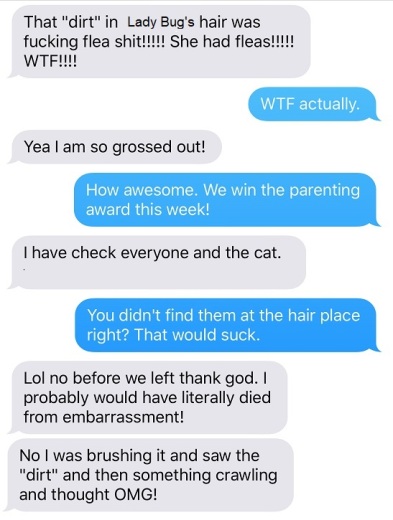 I remember going to the Children’s Museum and getting lice from trying on the fireman’s helmets. It is something like a rite of passage for children to have a lice scare at some point. But a flea? And a mystery flea at that. Where did it come from? The main culprit, our dog, has been reduced to ashes and crammed in a wooden box. She didn’t do it. Everyone else is in the clear. The house has been double sanitized and the cat was inspected better than a strange bag at an airport. The only thing we can figure is that she got it from playing with the outside dogs or rolling in the grass. Who knows?

Which brings me to my next question, what pest treatment have you found most effective for children? Flea collars? The squeeze on liquid that you put between their shoulder blades so they can’t scratch? Or should I alternate bath soaps from Johnson and Johnson to Hartz Flea and Tick Dip?

Leave me a vote in the comments.

If your kids poke nipples, crap in the floor, or have fleas, this post is for you. I promise our kids are well cared for and the appropriate amount of attention is given to all things hygienic. I made a promise a while ago to be open and honest to my readers and myself so here you go. This wasn’t the first disgusting week and it won’t be the last. Supermom is preparing a guest post about cleaning the playroom. You’re welcome.