The mark of any good marriage is knowing how to pick your battles. I have selected mine. Luckily she doesn’t realize I have made an issue nor does she probably care. But I don’t let details like people caring get in my way. Let the battle of the pumpkins begin! Or continue actually. I have probably mentioned these things before but we have four pumpkins on our porch from mid-October. Aunt and Uncle to our little cherubs bought them each a pumpkin and they all got to decorate them in different ways. 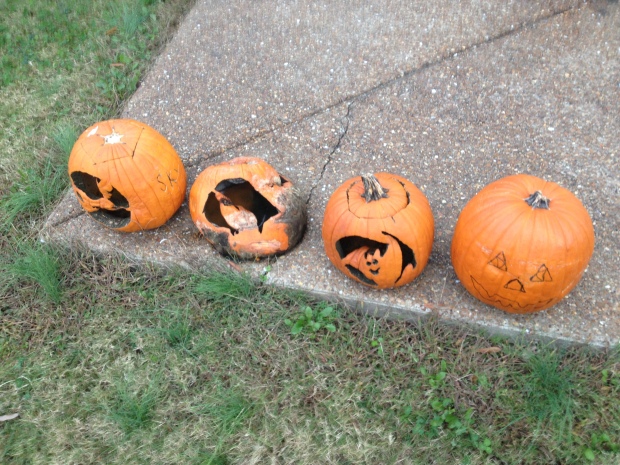 They were beautiful pumpkins and each were as unique as the children who made them but this story is not about that. This story begins about a year earlier at the discovery museum. It is the weekend after Halloween and we have grandparents visiting from out of town so we decided to visit a really cool museum. The museum had a pumpkin display with thousands of different kinds of pumpkins in all kinds of colors and sizes.

A benevolent museum worker informed us that since Halloween had passed, the museum was now allowing visitors to take home as many pumpkins as they could carry. We had a minivan and that meant we could carry home about nine. As a general rule I don’t like doing things that require me to do anything so I don’t think I was to blame for the pile of “Festive Decorations” that we brought home and dumped in a pile on our washed concrete sidewalk. To be fair, it probably would have been a festive decoration if our bushes weren’t overgrown and missing half of the lower leaves. You can’t sprinkle some pumpkins on top of a neglected suburban home and expect miracles.

The pumpkins sat in a slowly degrading pile until about Christmas when I (against my will) cleaned the pumpkins and dumped them in the back corner of the backyard. I should also note that I had the thought, “This will be a good start to a compost pile” and I piled up some leaves to kickstart the action. Apparently composting requires some effort and what I had was actually a covert pile of shit flavored gourds. Anyway… I felt that perhaps the pumpkin cleaning was not my duty. I never made an issue of my opinion but now you know part A of the story. 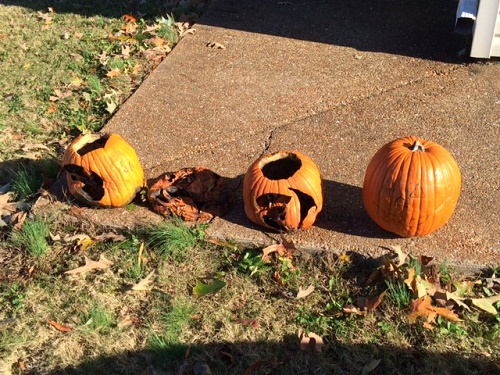 Fast forward to Halloween 2015 and we have some two-week-old pumpkins starting to break down. I have made a silent oath to myself to not be responsible for these particular pumpkins. The passive aggressive volley begins.

“Those pumpkins are looking rough.”

“I don’t know if they will make it much past Halloween.”

“Oh I bet they will make it longer than you think.”

October gave way to November and nature sucked the life out of the poor pumpkins. Actually the fourth pumpkin has fared really well and it is because it only got Sharpie’d. 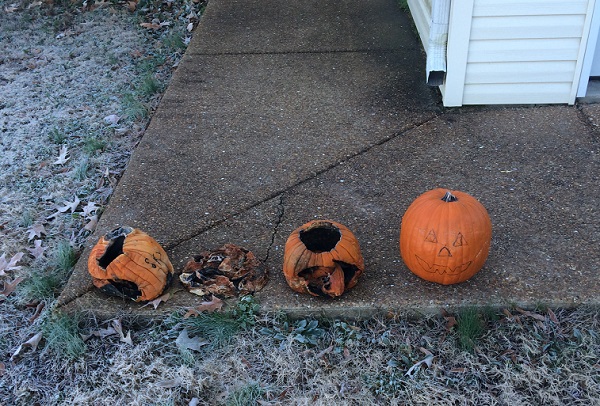 Skin is an amazing thing and I tried to make the rotting pumpkins a life lesson for the girls on how modified bodies will age over time versus things that are allowed to be natural. No one is buying it.

“My God those pumpkins are disgusting.”

“I know. Someone should do something.” 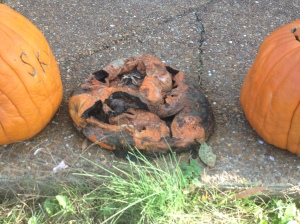 November gives way to December. We are well beyond needing to clean them up and easing into a morbid curiosity as to how far this thing might go. Supermom had some concern that our nativity of rotting orange might be off-putting for our Christmas spirited neighbors. So I found a genius solution… 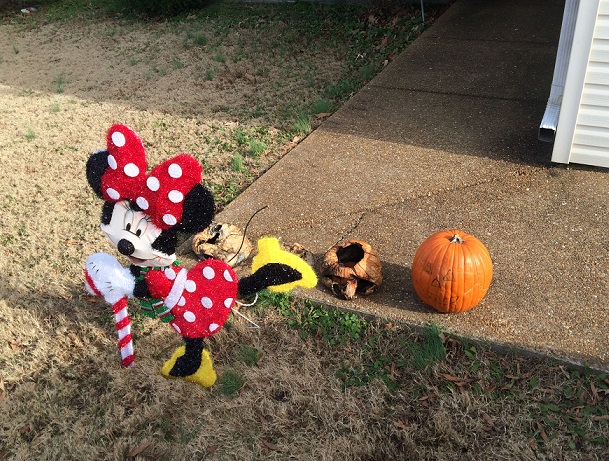 Perfect solution. I mean…what pumpkins? Am I right?

It is January 1st and the pumpkins are holding strong. They have become a fixture of the front sidewalk and I mean that more than metaphorically – I think one of the piles of dried residue has paper mache’d itself to the concrete. I think if I just paint everything red it will buy me another month until Valentine’s Day.

If you fight the little unspoken wars, this post is for you. I’m not even sure my opponent knows there is an issue. She has accepted defeat of an attractive front lawn as much as I have at this point. If you are my neighbor, I’m sorry and you’re welcome.