I’m not sure where this event started but it isn’t out of the ordinary for me to sit down with the girls and make up fun stories or draw crazy pictures. (Like the bear pooping in the woods.) Last night was the same and we started drawing puppets for the girls to put on a puppet show. The product was nothing short of creepy and awesome.

First, the girls brainstormed and wanted to make puppets to Mickey Mouse Clubhouse. I told them that it would be a copyright violation and that Disney doesn’t play so we should make another choice. Prima shouted out, “Chickey Mouse! Yay!”. I decided that it was time for a first lesson in the fine art of parody.

I don’t know what the bolt of awesomeness shooting out of his head is supposed to represent. He looks like an activated Manchurian Candidate. He brought out lots of laughs so we decided he needed a life mate… 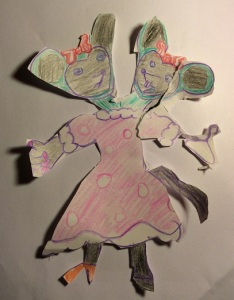 Twinnie Mouse is a two-headed mouse with a dragon claw for a right hand and a metal coat hangar for her left. She also sports a horse tail and a cloven hoof. Good thing she has two red bows and a polka-dot dress or you might think she is the devil incarnate. The head on the right is the creepy special needs zombie mouse who stares at you with dead eyes. The head on the right is equally special but never shuts up and tries to talk with her coat hanger hand which is dangerous. We almost couldn’t breathe after creating Twinnie Mouse but the world demanded more awesomeness…

It’s Sponge Bob’s quadriplegic half-brother who was fathered by the old creepy rat from The Secret of NIHM. Seriously look at the picture below.

Find me a female sponge with which to mate!

I don’t know if he is an oracle, a poltergeist manifestation, or an malformed inbred rat-thing. Oh well… On to the next freaks of the Chickey Mouse Treehouse 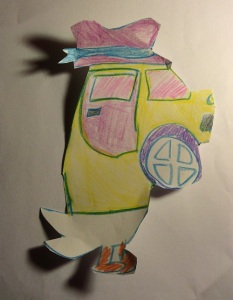 I was getting tired.

She is looking for corn or other seeds on the ground.

This is where I drew the line. We were low on oxygen from laughing too hard and drew a stalk of wheat with a head.

We didn’t get a chance to draw the magic flying portal of snacks, NOODLES. Or the over-sized dog the size of a planet which is still named Pluto.

For all of the people who don’t know Toodles, this post is for you. Remember it and when you have kids come back to enjoy it. For all you other saps, I have but one thought… Hot Dog Hot Dog Hot Diggity Dog We Got Ears Its Time For Cheers! You’re Welcome!