So Jane has decided she likes dragons. She has a book that catalogs the dragons of the world and gives locations with names and features. An animated book but to an eight year old, it is the Dragon Bible.

One morning she was being particularly insistent on us getting a dragon that I made a deal with her; If you find a real dragon that breathes fire and flies then we will buy it. “FOR REAL?” “Yes, For REAL.” Assuming of course that it is for sale. We might have to capture it. Using the pure imagination of a child she smiled and was inspired to find this mystical creature.

I heard about finding a dragon for the next week. We talked about hunting them.

“Daddy do you think we will find one?”

“I’ve never seen one but who knows. You might as well keep looking just in case.”

Fast forward to Saturday and Supermom and I are shopping at the Toy Story with three of the four. Later that day we had scheduled a dragon hunt. Jane was riding horses and excited about the pending quest. As we came around the very last aisle, there was a bargain bin of…dragons. Prima and Threeto grabbed a couple right away and were in love. From there we hatched a plan.

I selected four dragons for a “price check” and bought them and hid them in the trunk. Then I told the girls that the story had made a mistake and the dragons weren’t for sale. Luckily they have the attention span of a drunken kitten. Step two was to race to Grandma’s house and I hiked into the woods to hide the dragons.

Once Jane arrived I gave the ground rules for the hunt and everyone hit the ground running. The excitement grew with the first successful capture. The last dragon was the hardest to find and required rolling under a barbed wire fence. Side note: I need to diet. Now. 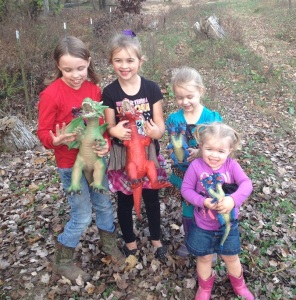 Everyone showing their trophy hunt!

Of course, leave it to Prima to say, “OMG these look just like the ones at Toys-R-Us” 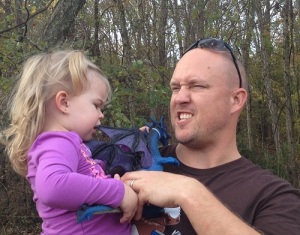 Already in the action! Dragon nibbles.

Say Cheese! Probably the only “hunt” Supermom will ever take part in.

Suffice it to say, they love their dragons. They have gotten along for five days because of these dragons. They used iPads and made videos. 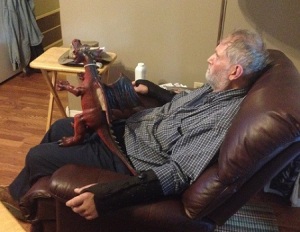 This mission was a total success. Jane made a good decision to create some protective goggles for the fire breath.

It is good to have a success amidst failure. I haven’t even told everyone about the rabbits in my backyard yet. Fail.

So cute though. Except for waking up at 6:45 on a Wednesday morning to find that the oldest two girls brought in three rabbits and released them into the house unattended. They did spread hay around just in case the rabbits got hungry. So I walked out of the bedroom and tried to dodge a minefield of rabbit poop, hay, and actual rabbits that were burrowed into piles of dirty laundry. I think it was a new low. I didn’t even have a response for the girls. I just pointed at the door and glared. 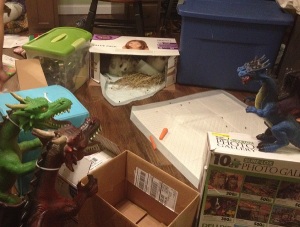 I dont think the dragons are helping with the mental health of the bunnies.

If you ever enjoy a one step forward and two steps back kind of existence, this post is for you. You’re welcome. And let me know if you want a bunny. We have two left.