We have a teenager living in the house and he is learning about hormones and physical urges. I don’t know how to talk with him. I mean that quite literally, I have zero idea how to actually talk with him in a way that he will understand. It is getting a little uncomfortable because he is being inappropriate with family and I have even caught him with a couple of “friends”.

Take this afternoon for instance. I woke up from a really awesome nap and as I was leaving my room I see him standing up really fast from something he was doing in the floor. The young lady next to him was looking a little disheveled and her skirt was entirely too short. I’m not saying she was asking for it but she wasn’t helping the situation. Hello Kitty indeed. 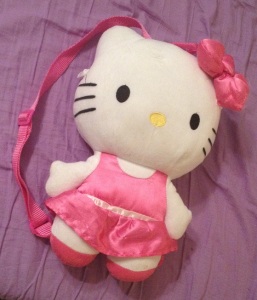 I never considered this kind of behavior out of Ms Kitty.

We talked about what is appropriate and the fact that his mother “is in the next room” and that she would be disappointing in his behavior. He scratched his stomach and hopped right past me into the hallway. He was ignoring me but I played it cool. I remember my teenage years and chasing something in a short pink skirt is not a glass house that I could throw rocks at.

Fast forward to this evening and I couldn’t believe that he pulled the same stunt again. This time the young lady was a little brasher. Her skirt was just window dressing and her bare backside was out in broad daylight. There was also no denying the activity that they were involved in; he was laid out in a full horizontal mambo.  He was stuffing Poly-Fill like nobody’s business. I know what needs to be done.

Look at that hussy. Flying around seducing innocent marsupials.

I talked with a doctor on Friday and she agreed to help me cut off his balls. I feel bad because I know what he is in for but we have all the animals, stuffed and real, that we ever need. God help us if either start to breed.

I guess I will just have to deal with the excess bravado for the next week or so until we can complete the snip. I was surprised at the amount of trepidation that most veterinarians had when I asked them to try the procedure. I was to the point where I was going to feed him whiskey and use the garden shears. No need to worry though, I found someone to help and she even suggested that we remove the scrotum. I told her that as long as he wasn’t banging Hello Kitty in front of three slack jawed girls then I would be happy. I don’t care if she makes a coin purse to sell at a craft fair. Snip. Snip. Clock is ticking lady.

We did consider buying a stuffed T-Rex for some “stress relief”.

If you are dealing with strange hormones then this post is for you. I’m not ready for the real struggle of actual children with teenage hormones in a few years. I can barely discuss the scrotum of a pet with a straight face. Oh well. No turning back now.