Have you ever seen someone walking a dog and thought, “Wow, pets really do match their owners.”? I have on several occasions. Check out some pictures of dogs and their owners.

Creepy right? Funny too, but creepy.

That makes me wonder if the phenomenon applies to all pets. Which pet do I favor?

Is it the dog, Biscuit?

I don’t wear diapers but I do have to pee a lot. I assume it is because I drink lots of water but maybe I am sympathizing. I have selective hearing and I am getting some grey in my hair. I want to lay around but am nervous that something will pounce on me. Hmmm.

I like to snuggle up to Supermom because she is warm. I clunk around late at night and knock things over. I also prefer my bathroom time to be private time, which is something that only the cat can relate to. I can’t pay these people to shut a freaking door. And for God’s sake, flush the toilet!

No. I don’t think I am exactly like the cat either. Maybe the wallaby.

While I do have several stories about how I am an idiot, this guy is actually stupid. I refuse to think I am anything like the wallaby.

They are dumb as a box of rocks. I don’t know how wallabies have evaded natural selection for so long. Check out this picture. 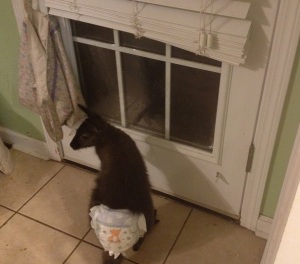 He sees his reflection in the door and engages in a fight for dominance. FOR. HOURS. Other times he thinks the glass is a portal to another world. Like the brick wall that leads to the Hogwarts Train, he hops at normal speed and plows into it face first. Five minutes later… same thing.

He also has no control over his urges because we haven’t chopped off his man-berries yet. Poor yellow-dog. He has endured things that no stuffed animal should have to suffer. Yellow dog is part of Toby’s harem of stuffed animals and pillows. As he hops through his kingdom he might decide to stop and have an afternoon delight at any moment. Definitely not a leisure that I enjoy but then again he isn’t married. Just to be clear and not totally weird, I meant afternoon sex and not the leisure of humping stuffed animals. You know what… nevermind. Moving on.

Toby also eats crayons. He searches them out from the couch cushions, under the edge of the recliner, and from various nooks and crannies around the house. If you don’t catch him immediately, he will plow through the whole crayon like a wood chipper. There will be a few pieces of paper from the wrapper and some oddly colored poo balls in a few days. He likes chalk too. I can see chalk for mineral deficiency or whatnot but who is short on wax? I am waiting on the day I have to explain to a vet that he died from a 64 pack of crayolas.

ME: “He overdosed on Burnt Umber.”

If you ever wonder what your pets might be saying about you, this post is for you. Apparently mine say I’m incontinent, I vomit hairballs, and I walk into solid surfaces expecting to magically pass right through. You’re welcome.

Tell me about your pet and what they say about you. I am curious.