A few years ago we travelled to Eureka Springs, Arkansas for a wedding. Not knowing the sites and attractions, we drove around town and got some directions from locals. They all heavily suggested visiting the large Jesus statue at the top of a mountain. The place we ended up looked like an Old West tourist town that had been converted to early Jerusalem and was being used for biblical reenactments. Regretfully, there were none scheduled that day. We did get to visit the Stucco Son of God and behold his splendor. It had a lasting effect on me and I wanted to share that story with you. By lasting effect I mean it was disturbing and bordering on blasphemous. Maybe I’m over-reacting but here is how I see this thing getting built.

This is a photo story of the building of the greatest monument known to mankind. The eighth wonder of the modern world. A simultaneous tale of ingenuity, perseverance, inspired artistic ability, and a sense of community that would unite a small town in Arkansas and forever change the world.

The following is an estimated re-creation of the epic thoughts and conversations that are cemented into legend at the top of a mountain in Eureka Springs, Arkansas. The true story is lost to time but the following accounts help walk you down the path and hopefully enjoy the journey along the way.

Facing daunting shortfalls in local budgets, Eureka Springs had some decisions to make. If they were going to remain a town with any public service or infrastructure they would have to find a way to increase revenue. Town mayor, who I assume was named McLovin, called a meeting of the minds and out of that meeting came the legalization of marijuana including direct injection into the brain.

Everyone immediately brain-injected marijuana based compounds and held the second most important town meeting on what could be done to attract tourists. Mayor McLovin rose to speak, “What we need in this here town is something BIG!.”

“We need something that rises above the mountains and looks over the valley and says COME AND SEE ME!”

A lone citizen voiced concern, “We cant do it alone. We need the help of Jesus.”

Mayor McLovin, “That’s IT! We need JESUS! Just like that statue in Brazil!”

“Alderman Smith, you go get a case of potato chips, some crayons and poster board, and a case or Orange Soda. It is going to be a long night.”

The alderman left for the provisions and the intense planning began. The following are major questions and responses captioned below the pictures.

Step 1 – What does that Statue in Rio, Brazil look like?

Carved stone and real deal work of art in Rio.

Step 2 – What can we use to build the body frame since we are low on budget? 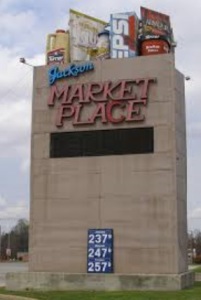 We need something with a strong metal frame and a boxy look to it.

Oh yeah the arms. How about making them like a totem pole.

Step 4 – How should his head be shaped? 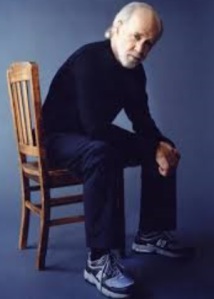 I was thinking about George Carlin’s high forehead and face in general, bring some white male to the Jesus image.

We can finish his hair out in dreads like that guy on Pirates of the Caribbean. Perfect.

Step 6 – How about the upper body shape?

Step 7 – What about the necklace?

Leave off the necklace. Jesus wearing a necklace of the cross is like Kurt Cobain being buried with a shotgun. Just not a nice thing to do.

Step 8 – This need to be in a garden, what should it look like?

Step 9 – Who will build this masterpiece?

We need a true artist who isn’t hindered by unneeded senses. He goes on heart and feel.

Step 10 – We are on a budget, what materials should we use?

Duh. Paper Mache. Cheap and easy and we can always make more.

Six labor intensive months went by as locals came together to build this ragtag Mecca of the Ozarks. This Field of Dreams for religious travelers. A regional reminder of who is in charge of the Southeastern United States!

BEHOLD THE MAJESTY! BASK IN THE GLORY! 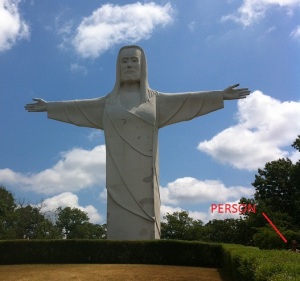 Person on right for scale. What about that?

You too can drive here and check it out. I recommend it at a medium level. Am I way off base here or isnt this statue disturbing, What would Pinterest have to say? 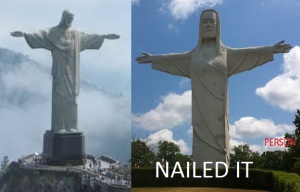 Possibly the world’s most diverse collaboration on a statue of the Christian lord and savior. Tickets are five dollars and there is a restroom directly behind him. I may be going to hell but if you laughed then you are going with me. You’re welcome.