On October 22 my lovely wife, Supermom, was checking her phone and noticed the date. She paused in thought for a moment and then turned to me.

My mind is racing to figure out what I have forgotten. Men can never be too sure of the milestones that we are supposed to remember.

She thinks for another moment and then, less confidently, “Is tomorrow important to you?”

Light bulb. Our anniversary. I smile because the 23rd isn’t the correct day either.

According to stereotypes, that is my line but I’ll let her have it. Most likely, she has been trying to forget and is getting better at it every year. I will always remember and speaking of things she tries to forget. I would like to honor everyone with the story of how we met. If for no other reason than to prove that she had fair warning of what she was marrying into.

I was a regular patron of a country line dance bar near my college. My two favorite pastimes were drinking beer and getting dates by teaching unsuspecting ladies how to do the different line dances. This particular night I had been enjoying my first pastime way more than my second. My friends and I were having a good time dancing but it was time to take a break and grab another Bud Light.

I remember the first sighting, dark blue American Eagle T-shirt and khaki short shorts. I also remember thinking very specifically that I could marry her. Not a premonition that I would but that I could if I had the chance. It really was a magic moment for me. She looked like a deer in the headlights as I sauntered up and asked for a dance. She glanced around looking for a way out but my sniper-of-a-wingman already had her wing-woman by the hand, heading to the dance floor. I would later find out that Supermom isn’t much for conflict, so she agreed to a dance just to be nice and not sit alone.

We talked about something I’m sure. Actually, I probably talked nonstop while she counted the seconds until the song was finished. According to her field notes, she held me up for most of the slow dance series. I followed her back to her table after the dance and, in what is probably the smoothest pickup line ever, I asked her to dinner at McDonalds.

In my thoughts the reasoning sounded like, “I want to spend more time with this lovely lady. She is so beautiful that I just want to be in her presence. We could be anywhere just so long as we are together. I have to let her know how I feel…”

It came out of my mouth, “I want to take you out and it can be anywhere. It could even be McDonalds.”

What is the problem? Google realizes that it is upscale.

Imagine my surprise when I got the cold shoulder with the “maybe” or “I’m busy” for the next three months. What thick headed dolt keeps trying for three months? This guy.

Finally the friends angle worked and she learned that most of the time I can stand on my own power and make complete sentences. We both continued to be regulars at the same place and one night she agreed to our first unofficial date, IHOP, after the bar closed down. Everything was going really well and I had almost erased my stellar first impression. The bar announced the last call and we headed for the door.

I had a nice Mustang GT at the time which is a facsimile for a Lamborghini in the South. 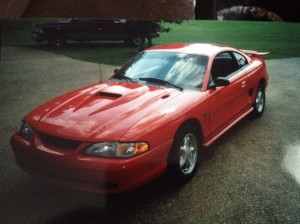 There really was no reason to say what I did but as we passed a really nice two-seater convertible I said, “Well, here is my car!” I stood confidently by this little silver car which was not my Mustang and waited for her to be impressed. She pulled out a set of keys and said, “Actually, it is mine but you can drive it if you want.”

I’ll be damned. Talk about not catching a break.

Not my sweet ride.

Yet somehow, in spite of the red flags, she still gave me a chance. I gave up on trying to be impressive and she gave up on avoiding me. We were married in 2006.

See I have evidence.

She is my best friend and like Forest and Bubba, I feel like we spend our time leaning against each other to keep our “Heads out tha’ mud.” Four kids and eight years later, she is a better mom and wife than I deserve.

To all the wives who know that your husband married out of his range, this post is for you. And for Supermom.