Potty training is a milestone that gets a lot of emphasis along with A,B,C’s and walking. We have this golden goal as parents to teach our kids precise control of their bodies and minds. Like the other milestones, potty training is one of the things we use as a yardstick for parenting. A reflection of how good we are at our jobs. After going through this process a number of times I have little to no idea on the correct way to go about it.

Jane, our first, was our unicorn. We started noticing dry diapers in the mornings and made the switch when she was almost three. She had two accidents. Back to back. The first morning we tried. After that… Never. Again. She has a flawless record. Needless to say we were pretty high on our abilities. One day potty trained? High Five! World’s Best Parents Ever!

Prima-the-ballerina, child number two, was a different story. She is a different genre. She is shy and didn’t want anyone to know that she had to go, or if she had gone in her diaper, or that she even has any kind of bodily function. Very difficult because if you asked her about having to go before leaving the house she would always answer no. We learned that lesson the hard way. The first day was semi-successful with only one accident. That was one less than her older sister so obviously we were better parents than previously thought. This level of awesome is getting off the scale. Then we went to Lowes to try an out of the house trip.

About halfway down the paint aisle Prima stops and stares at her shoes. Is she intimidated by the vast selection of Valspar color match paints? I couldn’t tell. She stops and stares at things all the time so it didn’t seem all that strange. Then we noticed a six foot diameter puddle spreading and surrounding her feet. Not good. We look in our diaper bag which at this point has everything related to childcare except a towel or extra clothes. I am confused. She made it a whole day. This is supposed to be a done deal.

I take off to the bathroom to look for paper towels. We have a precious few minutes to get this piss out of the floor undetected and act like nothing happened. Zero paper towels. I come out of the bathroom moving swiftly back towards the spill site. An attentive employee recognizes my uncomfortable look and asks if they can be of any assistance. It is a humbling right of passage to ask another grown man to help you clean pee out of the floor. The only time I felt lower was bumming a diaper off of a stranger at a rest stop on the interstate. Okay maybe not the only time but that’s not the point. I tried to explain my needs to the employee.

“We had a little accident and I need some paper towels.”
“That’s no problem people spill things all the time. How many towels do you need?”
“Two or three rolls should do it.”

He paused for his brain to process what product or amount of liquid could require three rolls of towels. I gave him a little more information.

“We have a two year old and she didn’t make it to the bathroom.”
“Oh. Oooooh. Okay.”

He was noticeably less helpful. I saw the judgey-ness and the unspoken question of “why isn’t she in a diaper? You are a terrible father.”

He gave me paper towels and a trash bag and then left. I assume to wash his hands from of the mere thought of soaking up urine. Public urination rarely attracts friends. We cleaned and went home to regroup.

We continued to struggle with training for a while but then right around three years old she decided to be done with diapers and was finished. Her personality stayed true and to this day I am only aware of her going a handful of times. Like Santa, she sneaks around when people are unaware and leaves gifts for others to find. None of them flush. Ever.

So with two children trained and both having different experiences we tried to gauge our approach to number three, Don Threeto. I’m going to refer to her as Don Threeto because she may actually run an organized criminal empire. She is hard headed, calculating, and has no shame. She is cute and loving too but a very strong personality. We presented her with the idea of potty training a little before three years old and she considered the idea for a full three minutes before she pissed her pants on purpose. She is totally honest so when we asked, “What happened?”. She didn’t even look up as she said, “I pee my pants.” She smiled and was proud at her achievement.

We tried everything from chastising her to letting her be uncomfortable for a few minutes in hopes she wouldn’t want bulky diapers or soaked underwear. She absolutely didn’t care. Once she sat on the closed toilet and let it rip right into the floor. Her sister, Prima, came running in to talk with her because girls talk to each other while peeing. Prima slipped on the newly wet floor and hurt her elbow. Now Don Threeto is upset because her sister is crying with a bruised elbow and Prima’s clothes are soaked in someone else’s pee. Where do I start to clean this up? I set them both directly in the tub and ran a bath. The first of many.

I have become tired of all the different ways I have to clean pee. Random napping without pull-ups regularly ruins bed sheets, car seats, and a few times I have been peed on while holding them in public. I watched one child think about going to the bathroom only to decide the TV show was too important and then soaked herself on the spot. I could have pulled the cable out of the wall. There was a stretch of time where they would hide diapers or sheets behind doors in a gross hide-and-seek game. I felt like everything smelled like old maple syrup. We selected things because “they hadn’t been peed on in a while.” Or “Aren’t that bad.” This was a lonely time.

Something that could be relevant – during this time we had a rescued dog who also proved to be a submissive pee-er with abandonment issues. He would chew something important like wedding photos and then slink away when we got home leaving a trail of liquid embarrassment behind him. Maybe there was an ongoing territory dispute between the dog and the children. Whatever the reason, someone had laid claim to the entire house. I would have joined in as the Alpha if it would have helped. We have nice fake hardwood now and our rescue, Chester Sparkles, has a nice outdoors home. It was good timing because our first dog, now ten, has developed incontinence and also wears a diaper. 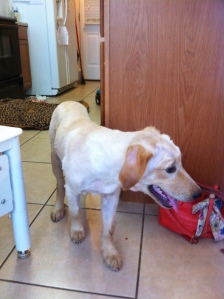 Eventually, Don Threeto decides that she is also done with diapers and is finished overnight. Somewhere right around three years old. This triggers a memory of early advice from a good friend, “You can start training at two and by three they will have it or you can start at three and they will be done in a week.” Not a hundred percent but still some pretty good advice.

I now change my dog’s Dora-the-Absorber pull-ups. Another worst feeling in the world – Let the dog outside to pee and forget to remove the Dora diaper = Dog Bath. My fall from manhood to broken parent is complete. I can’t wait until I am elderly and under their care. I may develop dementia but I will remember this time and repay them fully. Once again I am way off track.

The one thing that I did learn for sure is that diapers are easy. So so easy. Don’t let the world lie to you! Stopping every twenty miles on long trips, washing car seat covers, or walking through some public event with a huge wet stain down your side is difficult. Diapers are easy. All kids are different and are ready at different times. Just because they “can” use the potty doesn’t mean they are trained, it could mean that you wash a lot of clothes and that is technically just cloth diapering.

If you have trouble with this milestone this story is for you. I have been through three and have one more to go and I have no idea how to do it correctly. I have been tempted to just leave them in diapers until they start school and let public shame do the work for me. I’ll be on the ballot for Parent of the Year. You’re welcome.