So today I am on the confessional. I kill small animals. Not on purpose or maliciously but it happens. That doesn’t make it any better, I know. In fact my bad luck isn’t limited to animals. This black cloud of death has always lingered around house plants and small scale gardening too.

I have a certified black thumb. I can’t begin to tally the tomato plants that were doomed when I put them in the cart at Lowes. Plant food, over watering, under watering, bugs, over application of pesticide, kids trampling the plants, mowing the plants with the actual lawn mower. I was not meant to sustain small and fragile life. Our long term pets make it because they remind me of what they need.

My wife is also not immune to the accidental murder juju. One spring in a particularly wet season we found some tadpoles in a puddle across the street. Being awesome parents we thought, “What a wonderful opportunity to teach the kids about biology.” We collected the tadpoles in a large flat plastic Tupperware container and filled it with pond water. The kids were really excited and I energetically described how they would grow legs and lose the tails. Then the tadpoles would become frogs and leave the water. Each little swimming thing was given a name and we checked on them all day long. My oh my how the girls loved those tadpoles. 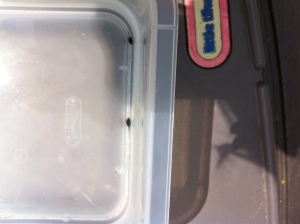 Those little dots are tadpoles.

Once the kids went to bed we talked about what a mistake we had made. Here are these tadpoles that are living and we have zero idea what to do to keep them alive. The slippery slope of reasoning took us to putting pieces of crackers in the water and adding crushed up stoneware for the tadpoles to use once they get new legs. Now, I’m not placing any blame but the next day someone put the tadpoles on a picnic table to get some sun and by the time I saw them they were baked. I assured my wife it was a quick death but who can say how long they fought… Then we thought of the kids.
Fortunately the kids were away at Grandmother’s house so we had a short few hours to come up with a plan. Obviously the kids would be destroyed emotionally from such a devastating loss. We had to come up with a believable story or find a more interesting replacement. My children are expert interrogators but they have the attention span of a fruit fly. The only option was to replace the tadpoles with something even more difficult to keep alive. Fish. What a spectacular idea. 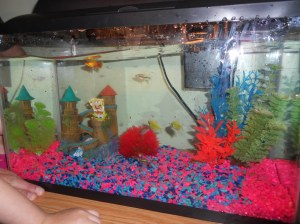 The pet store sold us a starter tank and a set of fish that were supposed to play well together. They were beautiful; pink, rainbow colors, glow in the dark, and a sucker fish for the algae. The children returned home to a bubbling tank of entertainment. We watched the fish for hours like a group of college kids staring at a Lava Lamp. The best part was that they didn’t mention the tadpoles. Success. 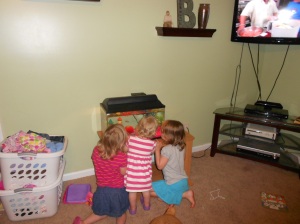 Then a few of the fish got the Ick, a fungus that kills everything in the tank except the sucker fish. Our replacements had the Ick too. We treated the tank and only half of the third round of fish died. Our kids, who we worried would be devastated by death of a beloved pet, had made a game of “spot the floating fish” and “who’s turn is it to flush?”

Once we went on vacation and I guess there was a power outage that turned off the filter pump. A week later there was a cesspool of fish skeletons. The sucker fish, named Vacuum, was happily eating the algae. Then a fish got sucked up the filter pipe and decayed. That was awesome too. I finally sent the sucker fish to a bigger tank at a new home and put the ghost town fish tank on the back porch. Suddenly the sight of a tank with a little water on the back porch triggered a memory and the second child looks at me and asks, “What happened to our tadpoles?” The first child, Calamity Jane, answers immediately, “They probably died.” They had zero concern for the tadpoles or the fish. I could have told them that the tadpoles turned to unicorns and flew away.

It was decided, from now on we will just observe things like bugs and fish and birds. They aren’t meant to be pets anyway and they will be safer from us. This seemed like a very good rule.

One night we noticed a beautiful green and yellow tree frog on our back window. He was stuck to the glass and every now and then he would move around. The girls watched in wonder and we got several good photos. 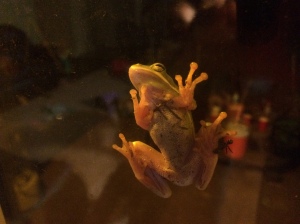 Majestic beauty of the tree frog.

We even followed the new rule. Previously, I would have put him in a box and tried to feed him flies. We would have looked at him and eventually he would have starved or been baked in the sun. We had learned our lesson and the next morning he was gone but we rested well knowing he was in the natural habitat. No doubt eating flies and enjoying the cool night air.

I know the air was cool because I let the dog out at about 1:00 in the morning. She has the bladder of a squirrel. By 7:00 am she already has to pee again and when I let her out again I found this… 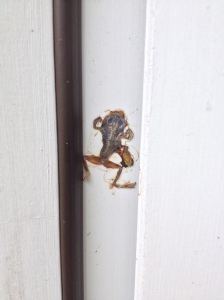 Dammit! Not again! If you are having trouble, this is what happens when a frog gets on the edge of the door and gets closed in the door frame.

If you stare at the picture long enough it looks like he was playing “Heaaads, Shoulders, Knees, and Toes, Knees and Tooooeees!” Too soon?

If you are an unintentional serial killer of small creatures, I feel your pain. You’re welcome.